Out of the clear blue of the western sky comes Sky King, a WWII naval aviator-turned rancher, who flies his twin-engine Cessna high above the Arizona plains. Accompanying Sky on his adventures are his nephew, Clipper and his teen niece, Penny.

The television version starred Kirby Grant as Sky King and Gloria Winters as Penny. Other regular characters included Sky's nephew Clipper, played byRon Hagerthy, and Mitch the sheriff, portrayed by Ewing Mitchell. Mitch, a competent and intelligent law enforcement officer, depended on his friend Sky's flying skills to solve the harder cases. Other recurring characters included Jim Bell, the ranch foreman, played in four episodes by Chubby Johnson, as well as Sheriff Hollister portrayed by Monte Blue in five episodes, and Bob Carey, portrayed in ten episodes by Norman Ollestad.
Read more about the cast
The television show was initially aired on Sunday afternoons on NBC between September 16, 1951, and October 26, 1952. These episodes were reshown on ABC on Saturday mornings during the following year (November 8, 1952, through September 21, 1953).  Later the show made its prime-time debut on ABC's Monday night lineup.
Read more about Episodes of Sky King
Get the full SKY KING series on DVD or VHS on sale here now!

Same Day Shipping !
We proudly bring you the entire Sky King syndicated television series on DVD! With the permission of the original Flying Crown Enterprises, we have digitally re-mastered their original film from the Broadcast Masters. 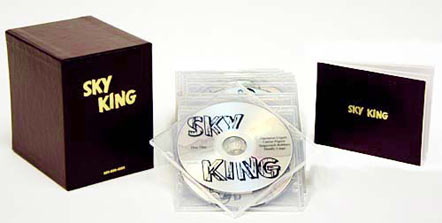 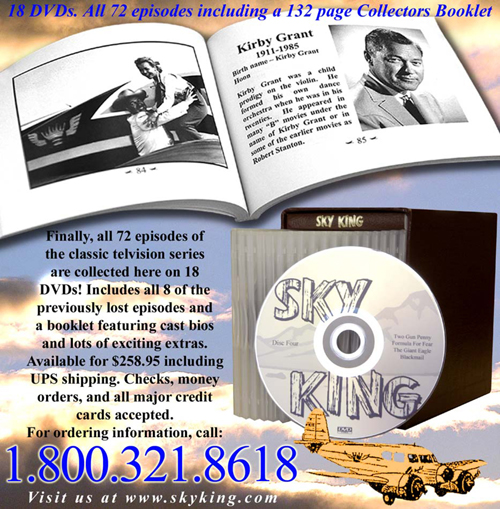 Bonus
Beginning Oct. 22, 2014 the newly released
Aviation Radio History
will be included FREE with every set.